Zika virus is an arthropod-borne virus (arbovirus) that primarily spreads through the bite of infected mosquitoes.  Although this happens less often, some people have been infected through sex, even if the other person doesn’t have symptoms.  It has spread to others before birth from mothers who are infected during pregnancy, and to others from blood transfusion.

Most people are infected by the yellow fever mosquito, Aedes aegypti, which is found in the tropics and southern United States.  These mosquitoes bite during both the day and night.  Although many areas of the United States have the type of mosquito that can spread Zika virus, this mosquito is not known to be established in Ohio.  The Asian tiger mosquito, Aedes albopictus, is a related mosquito that is found in Ohio and may potentially transmit Zika virus, although it has not been implicated yet in the transmission of human cases in the United States.

Many people infected with Zika virus won’t have symptoms or will only have mild symptoms. The most common symptoms of Zika are these:

Symptoms can last for several days to a week. People usually don’t get sick enough to go to the hospital, and they very rarely die of Zika. Once a person has been infected with Zika, they are likely to be protected from future infections.

The best way to prevent Zika virus infection is to prevent mosquito bites when traveling to areas with a risk of Zika.

Zika is linked to birth defects.

Zika infection during pregnancy can cause a serious birth defect called microcephaly that is a sign of incomplete brain development. Doctors have also found other problems in pregnancies and among fetuses and infants infected with Zika before birth. If you are pregnant and have a partner who lives in or has traveled to an area with a Zika outbreak    (as indicated by red areas on the Zika map) or with current or past spread of Zika (as indicated by purple areas on the Zika map), use condoms or do not have sex during your pregnancy.

Pregnant women should not travel to areas with Zika outbreaks (as indicated by red areas on the Zika map – see above link).

If you must travel to one of these areas, talk to your healthcare provider first and strictly follow steps to prevent mosquito bites and sexual transmission during your trip.  Before travel to areas with current or past spread of Zika  (as indicated by purple areas on the Zika map), pregnant women and couples considering pregnancy should talk with their doctors or other healthcare providers and carefully consider risks and possible consequences of travel.

Returning travelers infected with Zika can spread the virus through mosquito bites and sex.

Even if they do not feel sick, travelers returning from an area with risk of Zika should take steps to prevent mosquito bites for 3 weeks so they do not spread Zika to uninfected mosquitoes. If a mosquito bites a person while he or she has Zika virus in his or her blood, the mosquito can become infected and then infect other people.

Couples with a partner who lives in or has traveled to an area with risk of Zika should take steps to protect themselves during sex.  Zika can stay in semen for months after infection (even without symptoms), and can be spread to partners during that time.

More information on the Zika virus can be found here:

Centers for Disease Control and Prevention

For Access to Healthcare & Resources for Ashtabula County residents

INFORMATION ON OUR VACCINES

The Public Health Accreditation Board (PHAB) is a nonprofit organization dedicated to improving and protecting the health of the public by advancing and ultimately transforming the quality and performance of state, local, tribal, and territorial public health departments. 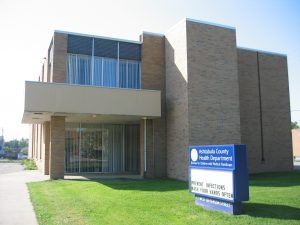